Créations Dorées is a Haitian company founded in 2009 by the amazing & very talented, women Stéphanie Dartigue & Sara Magloire, creating & working passionately with the artisans of Haïti.

Créations dorées wants to fill the life of their clients with colors magic & dreams by creating unique pieces & trying to exceed the eye’s expectations.

Even having people looking twice when they see it.

All the excitement happening next to Donna Karan exhibiting her new Urban Zen Foundation line produced in Haïti for Haïti, showcased with her participation this year at the tourism session, all at the Forum “Invest in Haïti”.

Along with Haïti’s actual president Michel Martelly, United States ex-president Bill Clinton, & many others here to invest for Haïti’s rich potential & culture, they cordially took the time to stop by & appreciate Créations dorées.

Stephanie & Sara are looking to the future of Creations dorees & are ready to represent Haïti. The next participation where the creations will be available is at “Femmes, création et production” also happening at the Karibe Hotel on December 10th & 11th of 2o11.

Here is the gallery for a better view of Safimag photos of CREATIONS DOREES.  You can also Visite & like Safimag facebook page for more pictures on this Haïti journey. Thank you! 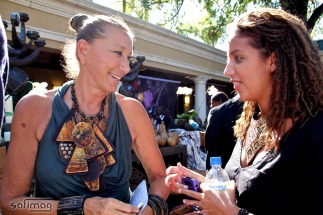